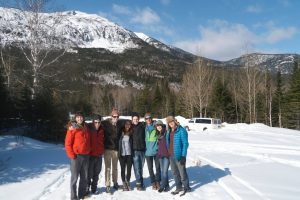 Thanks again for the support of our trip up to the Chic Chocs. We had an amazing adventure. We accomplished all our goals: skiing world-class powder, using/teaching our avalanche assessment skills, getting closer as a group of friends, having a blast, and lighting the fire for future backcountry endeavors in all seasons and locations.

Here’s a real quick trip report, if you like:
Day 1: Arrive at Gaspesie NP after a 12 hour drive (broken up by a hostel stay in Riviere du Loup, QC) around noon. Spend the afternoon moving in and then teaching beacon skills and probing/digging out survivors.
Day 2: Rise n shine! We hit up a long ridgeline called Villieres de St. Real — so many good lines available — but given that this was our first time “guiding” bc skiing, we played it pretty safe and hit a west facing chute that was fun but with lower snow quality than other aspects (which had been predicted to slide by the avy bulletin). It was awesome for the group to get a pretty easy/fun run under their belts, and especially tight to empty into an open drainage with three caribou hangin’ out! Long ski out to the car had us all exhausted. Tremendous weather in the mid-30s with sun. Too warm, actually.
Day 3: The Backyard. We stayed at the Camping Refuge area 1.5 km north of the main hotel (Gite du Mont Albert). Avy danger had risen due to a really warm previous day, so we decided to play it safe and skin up the hill behind our house to a slope with north facing aspect and trees. We’d seen tracks, and some Quebecois folks had communicated what little English they seemed to know: “faceshots all day!! heaven on earth!” With that in mind, we were pretty stoked, and were not disappointed. Waist deep powder/first tracks after a quick 90 minute skin up!! The trees thin somewhat, making it totally navigable for the entire group. Thought this didn’t have the aesthetic appeal of being up above tree-line the day before, the snow quality was undeniable/UNREAL. Powder like that will have me dreaming of the Chocs for years to come. Overcast, high 30s.
Day 4: Why mess with success? We woke up earlier than the day before and again hit The Backyard. The ridge line we ascended was very continuous and wide — despite spending 4 hours on it the day before, we occupied ourselves with it again for ~6 hours on today, and still got mostly first tracks. Again, just unreal skiing. Built a little kicker at the end of run and threw some pretty sick lil 180s and 360s after sleighing pow like Santa. Mostly cloudy, high 20s.
Day 5: Our last day of skiing, unfortunately. We were all a bit physically beat, and some folks wanted to head up The Backyard again, but a consensus was reached that we should try to hit up some new terrain since this was our last day. We skinned up Mont Hog’s Back and enjoyed terrific views and bluebird weather. However, we got scared off by avalanche conditions. We dug a pit, saw some shearing at a reasonable impact level, and decided to ski down the icy/solid/less-steep west face, rather than the NE face we had eyeballed. It was definitely disappointing, and, in hindsight, we almost certainly could have skied the NE face and been fine. But, as my co-leader and I decided, we can’t mess around with our gut feeling, especially when we’re making decisions for more than just our own lives. Our gut said no, and we skied down the other side. No harm done. The mountain will be there next time. Bluebird, high 20s.