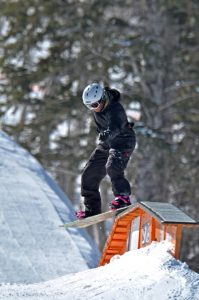 My name is Lucas Grossi, I am an amputee and an adaptive snowboard athlete. I am a Montana native and have lived in here most of my life. I competed regularly in the USASA Adaptive Division from 2000 – 2007 and most recently with these same athletes in Nakiska, Canada last March. After a 5 year break, I believe that I am still one of the top 5 adaptive snowboard athletes in the United States. Adaptive Snowboarding is now an official Paralympic sport for the 2014 Paralympic Games in Sochi, Russia.Over the next 2 seasons, there will be an North American Adaptive Snowboard Boardercross Series and the United States of America Snowboard Association National Championships (USASA). I am going to see the pinnacle of this movement, not as an organizer, but as an athlete. My training starts this winter in Whitefish, MT and continues in Park City, Utah.

Thank you to the Flyin Ryan Foundation for the support to help me achieve this goal of becoming a Paralympian.