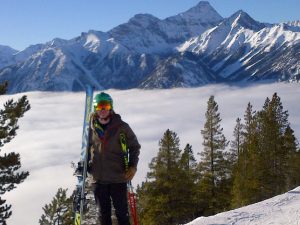 Quinn is a 20 year old skier from Phoenixville, Pennsylvania and he now attend school at Johnson State College in Johnson, Vermont. Quinn started skiing at an early age and started racing alpine shortly after that. He fell in love with skiing but never found a future in alpine racing. Once reaching high school he made a switch to skier-cross and now competes internationally in hopes to make the US Ski Cross Team.

This season competed in most of the North American Cup events and the USSA Revolution tour. I was named to the 2014 Project Gold Team Camp in Mt. Hood, Oregon this summer after a decent season of racing skier cross.   I was ranked 20th in the North American Cup Overall and placed 8th in the USSA Revolution Tour. I am still ranked 2nd on the East and I am ranked 12th in the country through USSA.

I am spending my summer break from school with my family in Pennsylvania and have been training for Skier Cross almost daily. Mountain biking has been a big part of my training since I have done it for so many years and enjoy it so much.