Adventure Scholar Aaron Rice is a native of Acton, Mass. He grew his love for skiing while racing on the icy slopes in New England and bushwhacking through the Vermont backcountry. After graduating from the University of Vermont, he moved out west. Aaron spent three years pushing into the Colorado, Utah, and Patagonia backcountry. He learned to travel in avalanche-prone terrain and how to move quickly and efficiently through the mountains.

In 2016, Aaron Rice broke the world record for most vertical feet skied in a year (over 2.5 million) all under his own power (no lifts!). He used his Adventure Scholarship to fund an additional avalanche training course before he began his mission.

Aaron Rice’s journey was chronicled in the short film  2.5 Million which was selected as a 2017 Banff Film Festival finalist. 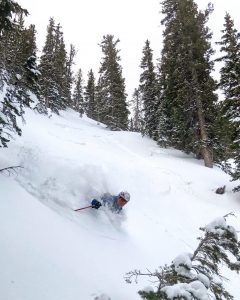