My name is Kaylie Fryer, I am a 14 year old athlete from Connecticut. Ski racing is my passion. I learned how to ski when I was about two years old and have been in love with the sport ever since. I ski race for Mount Southington Race Team. Throughout my life, I have grown up in a family who has shared the same love for skiing as me. I have grown up living in two separate houses, I had always thought it was like living two separate lives but in only one life. I was always a different person until I popped on my skis and took turns on the hill. Skiing has and will always be my happy place, up in the clouds where your only worry is not getting lost. Skiing has always been my getaway place, somewhere that anything other than what is on the snow doesn’t matter.

I was taught how to ski when I was about two years old. Ever since I remember I was always one who wanted to be the first down the hill, to be like the “big kids.” I was never on the podium until a few seasons ago. I dreamt of standing up on that top step, of being the best out there. About 2 seasons ago I was finally figuring it all out, beginning to podium. I was always pushing myself to work harder and harder. I believe that this past season was my best season. 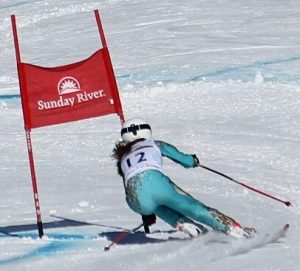 Even though I was injured and I missed 2 races I definitely believe that the physical therapy I did helped my strength tremendously.

My greatest accomplishment in ski racing was going to Can-Ams as part of the Eastern US team. This was one of my proudest moments. In the upcoming ski season I hope to be stronger and faster than I was this season. My goals in the upcoming season are to work on my technique, over coming my fears, and only being worried about beating me and my goals.

Check out her Letter of Recommendation!