Tim is also part of the Mad River Freeride program. He has captured the attention and praise from all his coaches and he is always pleased to be a guest of Mother Nature. Tim’s application was a thoughtful and well composed u tube presentation of himself and what skiing means to him. Tim was also awarded his tuition in the Mad River Freeride program. High Fives Foundation assisted with this award.

UPDATE from Tim: Last fall, at the suggestion of Ry Young (Head Coach of the Mad River Glen Freeskiing Team), I applied for the Flyin’ Ryan Hawks Scholarship, which I received and was awarded at the Big Kicker at the Big Picture, the Mad River Valley’s winter kickoff event. The scholarship allowed me to do the Mad River Glen Freeskiing Team that winter. With the help of the team’s awesome coaches, I was able to improve my skiing, and gain valuable experience competing in the Ski The East Freeride Tour. Despite the lack of snow throughout most of the winter, I probably had the most fun, and pushed my skiing the most of any of the 15 winters that I’ve been on skis. For this, I can thank the Flyin Ryan Hawks Foundation.

Since finishing the team last March, I’ve come a long way. I’m now a freshman at the University of Vermont, which has opened the door for many new opportunities. I’ve made a lot of new friends, while still being able to maintain the old connections to the people and places here in Vermont. I am on the UVM Freeskiing Team, which is dedicated to progression, and taking members’ skiing to the level. Through the team, I’m able to ski more than I ever have before, which has been great.

Along with the Freeskiing Team, one of the things I am most excited about this winter is the skiing my friends and I do at Mad River Glen. Inspired in part by Green Mountain Freeride, we have taken it upon ourselves to document our adventures on the trails, in the trees, and off the cliffs at Mad River in a web video series called Send It East. Through the series, we are able to showcase our skiing to an audience much broader than the Mad River community. It’s the times when I’m traversing across the mountain through thick evergreen stands, trudging through waist deep snow to the top of our line, or crouching under a frozen waterfall to get the shot of my friend jumping over me that I am most reminded of one of Ryan’s core values that I feel particularly relates to me: Never stop exploring life. While this value extends well beyond the world of skiing, I think that it has a much deeper meaning when used to describe these experiences on the mountain.

I hope that future Flyin’ Ryan Hawks Scholarship recipients will have as beneficial of an experience as I did. 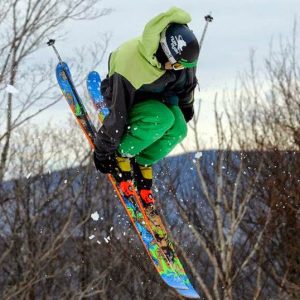