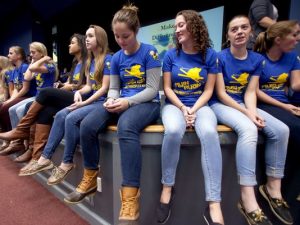 Watching the figure fly across the screen, Jordan Chapman could feel a connection.

The Milton High School junior sat in the school’s auditorium Monday as a video showed freeskier Ryan Hawks launching off cliffs, skimming the tops of frozen tree branches and landing in puffs of white powder. Though Chapman’s tastes in some things differ from Hawks’ — grunge music vs. reggae, Yankees vs. Red Sox — it was clear that the two shared at least one love.

Milton High School junior Jordan Chapman, left, talks with Peter Hawks following a school assembly Monday in preparation for this weekend’s Make a Difference Day. (Photo: KEVIN HURLEY/For the FREE PRESS)”We have a lot of things in common, and I think the biggest one is skiing,” said Chapman, who frequents the slopes of Smugglers’ Notch. “It made me feel very excited about the upcoming winter.”

Chapman also felt drawn to Hawks’ Core Principles, a sort of blueprint for living that was discovered on the former South Burlington Rebel’s computer after his death in a skiing accident in 2011. Ideas such as “never stop exploring life” and “never lose my adventuresome attitude” resonated with Chapman.

“It made me think about living my life to the fullest,” Chapman said. “Pursuing my dreams not only in skiing, but also in education and other projects that are meaningful in my life.”

One such project is Make a Difference Day, a collaborative event between the Flyin Ryan Hawks Foundation, the Gannett Foundation and the Burlington Free Press. Students at several area high schools will get an introduction to Hawks and his foundation and then craft their own list of Core Principles for living. The multi-day event culminates in various community service activities Saturday, which is national Make a Difference Day.

In Milton, that service component consists of a bottle drive, painting and community garden work, as well as filling up a bus with groceries for the local food shelf. The efforts are being coordinated by Milton’s Interact Club.

“Interact is community service-based,” said senior Alicia Muir. “We’ve done projects in the past, things like Green Up Day and delivering food baskets. This gives us one big project to tackle, to get out into the community.”

Other Make a Difference Day initiatives include a food drive and pumpkin carving event in Winooski and a kids’ Halloween party, food drive and benefit 5K walk/run in Colchester. Students from Essex and Champlain Valley Union high schools will also be volunteering at the Haunted Forest in Williston, while Mount Mansfield students clean up yards in their community.

Milton students got an introduction to the Flyin Ryan Foundation and its Core Principles during two assemblies Monday, in which they watched the skiing video and heard remarks from Peter Hawks, Ryan’s father, and John Painter, an South Burlington teacher who had Ryan as a student and was an adviser to him on the student council. Peter Hawks talked about how his son’s Core Principles helped shape a Decisions Program that has been implemented at South Burlington High School with such success that “the culture and climate of that school have changed.”

“It helps you answer the question for yourself, without outside influences: Who am I?” Peter Hawks said. “You’ve got lots of rules coming at you — from teachers, parents, coaches and the community. With the Flyin Ryan Decisions Program, you get to set the rules.”

Peter Hawks, father of Ryan Hawks, talks to Milton High School students about his son’s core principles during a school assembly Monday. (Photo: KEVIN HURLEY/For the FREE PRESS)
Painter told the students that drafting their own Core Principles would help open their eyes to positive change they can effect around them. Painter is the recipient of a prestigious Rowland Fellowship to further his work with the Flyin Ryan foundation.

“It encourages you not to underestimate the impact you have, in your daily lives, on the people around you,” said Painter, telling the students to use the hashtag #corevalues on Twitter to promote their community service Saturday.

“Get the word out,” Painter said. “We’ve got this huge event — let’s really make a difference.”

Senior Christine Perry, president of Milton Interact Club, said the program’s success in South Burlington and beyond makes participation all the more fulfilling.

“Thinking about how big Flyin Ryan has become, it’s exciting to be able to be a part of it,” Perry said. “It’s cool because we’re bettering ourselves through helping other people.”

Milton also has an example of the foundation’s positive outcomes from which to draw inspiration. Former student Carter Snow was one of 55 recipients of Flyin Ryan Adventure Scholar awards, and his own Core Principles have helped guide him from the Green Mountains to grander peaks out West.

“Carter is at Montana State, out living his dream — and I’m so glad he’s out there,” said his sister Abbey, a junior on the Interact club. “He’s always had an outdoorsy spirit, and an attitude of living all day every day. I think his connection to the foundation and Ryan’s principles solidified all that.”