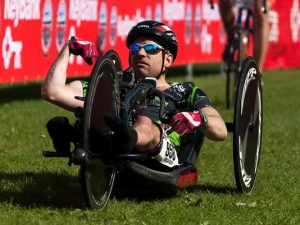 The four-time winner veered off course on Battery Street and quick action from a RunVermont official, who moved around some barriers to direct the handcyclist back to the right route, kept Shortsleeve’s race on track.

“The police bike, me and Doug, the lead cyclist, we were off course,” Shortsleeve said of the mishap. “I think it was Peter Delaney, the director, saw that and opened up some barricades so we could get back on the course.

The slight miscalculation did nothing to slow down Shortsleeve, who crossed the finish line in 1 hour, 28 minutes and nine seconds to break his own course record and win his fifth handcycle division title at the Vermont City Marathon.

Sit in the driver’s seat with record-setting men’s handcycle racer Jeremy Shortsleeve of Jericho, who smashed his own best time to set a new record at 26th KeyBank Vermont City Marathon on Sunday, May 25, 2014. RYAN MERCER/FREE PRESS

“Coming back this year, it was special. I wanted to make a statement,” said the Jericho resident. “I hope that it all comes together on race day and, fortunately, the past few years it has all come together for me.”

The course record was something Shortsleeve had his eye on going into the race, with the 1:28.45 record he set in 2012 well within reach.

“The weather had to be perfect, which it was,” Shortsleeve said. “My training was OK, the winter just didn’t let go … I was in much better shape in 2012 than I am now, but the bike is 10 pounds lighter so that helps.”

The pace Shortsleeve set to beat his record by more than 30 seconds had even the volunteer, who stayed with the handcycle winner on a bicycle, struggling to keep up for most of the race.

Shortsleeve said he tries to race the biker. “Doug is a horse, I am very fortunate that he has been the lead cyclist … He points out potholes, I talk with him all race long. It’s special to have him there,” he said.

While Shortsleeve may have been challenging the biker next to him, he was also racing the other 21 handcyclists — the largest handcycle field for the Vermont City Marathon.

“The more cyclists, the better,” Shortsleeve said of the expanding field. “More cyclists is more competition. The goal is always 25 handcyclists. Hopefully, we can keep growing it.”

Shortsleeve, who missed last year’s race, was inspired by Alicia Dana, a member of the U.S. Paralympic team, who won the handcycle race last year and set a women’s course record.

“I have talked to her a few times and picking her brain, because she has done a lot of huge races, helped me,” Shortsleeve said. “She’s special.”

For Shortsleeve, winning his fifth Vermont City Marathon and setting a new course record felt even better because he got to do it in Burlington.

“There are a lot of big races out there but I choose to come here. This is my hometown race. I love this race,” he said.

Charlotte Bathalon finished in the top spot in the women’s handcycle division, crossing the finish line at 2:15.40.