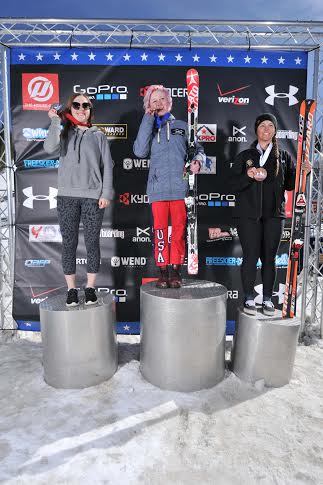 “Thanks so much for Flyin Ryan’s support during this past season!  I literally couldn’t have done it without the help.I had a rough start to the season and a strong finish.  I was challenged, had a blast and pushed through the tough times.” Mazie Hayden

It was Halloween, and it was definitely not a treat that awaited me that afternoon…  I heard a sharp crack, and the next thing I knew I was on the ground. My coach looked over, and by his expression, I knew he had heard it too.  Killington was opening next week, and I had just fractured my tibia while training on a playground obstacle course!  Thus began my first ski season as a full-time student at KMS, the hardest and most demanding winter of my life.

The two months of recovery following my injury were a blur of schoolwork and physical therapy. I routinely went rock climbing with a boot on, relying on my one good leg and arms to reach the top.  I was able to do seven pull-ups – pretty good for me.  Later, nausea-inducing early morning laps in the pool were the closest I got to using both legs.  Over Christmas break, I finally got on snow, but I felt completely unbalanced and awkward, not how I ever remember feeling on skis.

So of course, I jumped straight into training alpine for the first time in my life!  Up until this year, I trained primarily as a freestyle mogul skier.  I love the woods and bumps that are a hallmark of the East.  It was a natural progression for me to move toward ski cross – with its ever-changing obstacles, speed, and head-to-head competition.  But I knew that I needed to work on some of the technical alpine skills – such as stance, edging, and body position.  It was pretty hard to start racing as a U16.  Alpine terminology, gate training, and even speed suits were completely foreign.  However, my confusion and discouragement quickly transformed into excitement about this next challenge.

Needless to say, my ski cross season rapidly improved.  My leg strength and balance returned.  I had great success at USASA events in New York, Maine, and here in Vermont.  I went on to win my second Rev Tour at Ski Cooper.  I just returned from USASA Nationals where I once again raced and won the Open/Pro Class.

This year I was able to compete against the current Nor Am champion, a Canadian.  So naturally, I was pretty pumped when I got the fastest time trial.  I got the Holeshot in the semi-final heat and won easily.  But in finals, poor absorption and a bad start placed me in second until about three quarters of the way down the course…  I knew I had to go for it. She made a slight speed check in front of a double, and I saw my chance. I launched it, passed her mid-air, and crossed the finish line in first.

Looking toward next season, I’m ready for even more mental and physical growth.  (Hopefully, without the broken leg!)