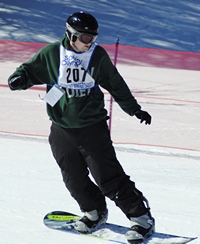 Hello, I am Chris Mitchell and I snowboard at Pico and Killington with Rutland Eagles Special Olympics as well as on my own. I have been invited to compete in a slalom race alongside a professional snowboarder at the X-Games in Aspen. I started snowboarding about eight years ago when my Special Olympics program connected with Byron Trepanier and Lucien Furneaux to start teaching me how to snowboard. I had been skiing for about thirteen years before that. Both Byron and Lucien moved a few years later but I still went to Pico or Killington just about every weekend they were open since then. Last year Rutland Special Olympics partnered with Vermont Adaptive Ski &Sport at Pico so over the course of the season I was assigned two coaches, Satchel Parsons and Mike Algren who have helped me progress a lot. Last year I even started going on double blacks and into woods.