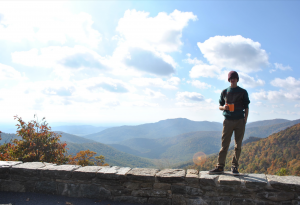 Julian Lathrop is a recent high-school graduate who is going on the trip of a lifetime before heading to UVM as an undeclared undergraduate student. Julian is driving cross-country with his friend, to get to as many national parks in the lower 48 states as they possibly can. He completed a 100 day section of his trip and realized that the money that he had to take the trip wasn’t going to be enough to make a fun, healthy, safe, and successful trip. Julian has been adventuring since a his early teens and has been on canoeing, backpacking, skiing, rock climbing, and cycling trips varying in length from half a day to several weeks. His current adventure is 9 months long driving to every corner of the USA volunteering on organic farms and Buddhist retreats, hiking, climbing, and paddling in over 45 national parks. He is taking this trip because he found himself in a time of transition like no other there would be in his life, and he had no idea what he wanted to do. He is using this year to explore the country, find himself, connect with nature and change his life, so far he is having an amazing time. This adventure would not be possible without the Flyin Ryan Hawks Foundation.