About 130 competitors participated in the Extreme Competition – Ski The East Freeride Tour (STEFT),  at Jay Peak (VT), March 25-26. The final IFSA sanctioned STEFT event of the 2017 season, it was a qualifier for the international Swatch Freeride World Tour. The competition’s Super Finals were held on Sunday under a bluebird sky, with modest wind and great snow. Many skiers completed very daring and successful “big air” moves. The quality of contestants’ performances was superb, with many examples of good judgment overcoming ego in presentation and execution.

The Flyin Ryan Hawks Foundation received a lot of attention, with an informational table set up at the base of the Tram Haus Lodge. Competitors and parents stopped by to express their appreciation for what we do.

The highlight of the weekend was presenting the first annual Flyin Ryan Core Values awards. During the final month of the STEFT, Freeride Tour coach Bryan Salatino, of the Smuggler’s Notch Freeride Team, solicited nominations from Tour participants for athletes demonstrating consistent application of Ryan Hawks’ 14 Principles for Living.

Our intention was to give an award to one male and one female participant to recognize their inspiration and performance. While lacking nominations for a female athlete, we had very strong nominations among the male athletes. It was a horse race, very tough to pick a winner. 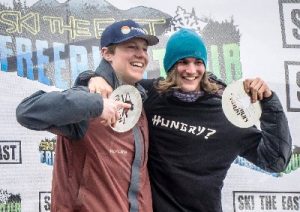 The solution, with a little input from a higher source (Ryan), was to give the two Core Values Awards to male athletes. Andreas Zvonar, who also won the competition at Jay and finished first overall on the Tour, earned the first award. Andreas won this event based on the fluidity and control he exhibited throughout the weekend. The other awardee, Parker Herlihy, who competed this year using a pair of Flyin Ryan skis, absolutely demonstrated Ryan’s Core Values in his style and execution on the slopes.

The foundation is thrilled to recognize these outstanding young athletes, and wish them well as they proceed down life’s path.