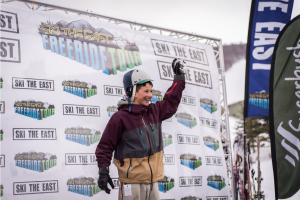 What a season it has been. This year hosted one of, if not the best ski seasons I have ever had. Between the seemingly bottomless winter (by east coast standards) and the beyond astounding competitions, this winter was a million times better because of the amazing friends who love the sport just as much as I do. The Flyin Ryan scholarship gave me the ability to have such an amazing season. I remember mentioning, mostly jokingly, that maybe I would be able to go compete in a competition out west, and it turned out, this season I was able to do so. It was one of the most amazing experiences of my life and one that I will never forget. I qualified for the Ski The East adult tour at the first junior event I went to. After getting better results than I ever could of imagined, one of which was a third place in the Sugarbush Castlerock competition at which I also won the Headliner Award for best line. After that, I went on to finish in the top 5 overall in the adult tour. After a great competition season in the east, I got invited to go the the Freeride National Championships at Grand Targhee in Wyoming. Although I crashed in the qualifiers, I had a run that the judges remembered, for good reasons (as I later found out from a friend who knows the judges). All of this was made possible by the Flyin Ryan Scholarship, and I cannot thank them enough for everything that they have made possible this year.